Enerdu Generation Station is now under construction.  The following information is to provide a brief summary of what is going on, what you can expect to see and what mitigation measures are in place.  This will be updated periodically as we move from one step to the next.

To provide access for the construction equipment and vehicles into what will become the in-water work area. The cofferdam will help stop water from entering this area and allow for the work area to eventually be dewatered.

Before work starts that day, the water clarity is recorded with photographs and water samples taken upstream and downstream of the work area. The water samples are tested on-site for turbidity. This is repeated during the day and again at the end of the shift.

A sediment fence (or silt fence) is installed on the shoreline downslope of where the ground is disturbed.  It is similar to the curtain but only consists of the fabric.  The bottom is buried and it is held up by stakes.

Photo from web of a turbidity curtain 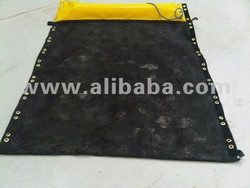 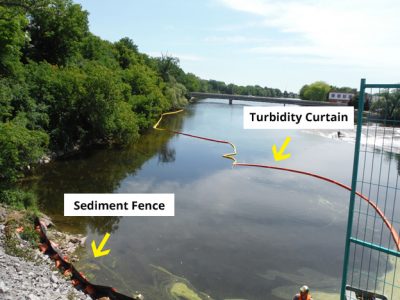 For this first step, rock is brought on site. The rock that is put in contact with the river is clean. This means that it has been processed off-site to only include large pieces and pre-washed to remove as much of the fines as possible.
Rock that goes on top, where the machinery will drive, is smaller and designed to be compacted and prevent rocks from being picked up and stuck into the wheels/tracks of the machines.

The access road will be built along the edge of the shoreline until it reaches the upstream point of the work area. From here, big white bags filled with clean rock are used to build the cofferdam. The bags will be wrapped in plastic sheets.

During any in-water construction on a large waterbody it is very difficult to keep water perfectly clear. The best techniques are to try to get your work area isolated (build the cofferdam) and dewatered as quickly as possible. Once this is done, there is less chance of disturbing the outside area.

Each time the turbidity curtain moves, either because it is pushed by the wind or because it needs to be moved for construction or removed at the end, it will stir up the bottom and any sediment collected on its surface.
Placement of rock on bottom will cause any algae and fines to lift up (same as it does when you walk in the river).
Placement of rock in water will create a plume from the dust on the rocks – usually a light grey colour.

To the extent practical, prevent the turbidity curtain from being pushed and keep the curtain fully secured to the bottom by using some of the white bags filled with rock to hold it in place.
Use clean rock for the lower part of the access road.
Work slowly to allow the sediment time to settle
Training and Monitoring
Involve the different agencies

As mentioned above the site is monitored by Project Supervisor daily.
The Biologist/Erosion and Sediment Control Inspector also monitors the integrity of the mitigation measures periodically based on the activities. Right now this is weekly.

In preparation for the construction period, the Department of Fisheries and Oceans biologist was invited to visit the site. This was scheduled in advance of construction and took place on Thursday, July 14, 2016 by DFO as part of their visits to a variety of sites in the area.

What happens when there is a plume?

The Project Supervisor calls the Spill Action Centre to report the plume.
On this project, they also call the Ontario Ministry of Natural Resources and Forestry and Enerdu’s biologist.
It is the Spill Action Centre who will call the Department of Fisheries and Oceans.
They evaluate the work and mitigation measures and make adjustments to improve the situation.
They note the time the plume started, when it ended, where it went and take water samples to record the turbidity.
Samples are sent to a laboratory to confirm the turbidity and to measure the concentration of total suspended solids.